Home > Getting to know Giacomo Puccini > His life 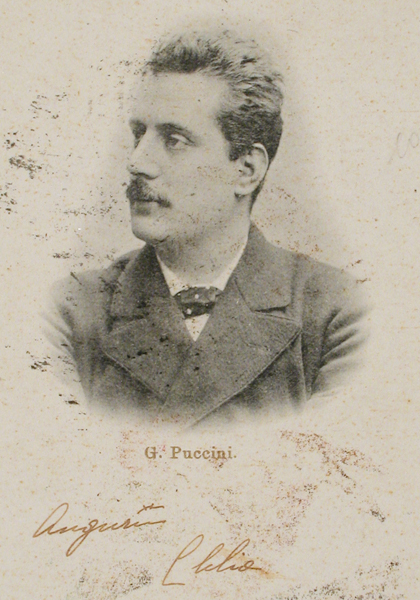 Giacomo Puccini was born in Lucca on 22 December, 1858, the last of a dynasty of composers who for more than a century held a virtual monopoly of the city’s musical life. In his early years he grew up with six sisters and a brother in the house of Corte S. Lorenzo, receiving his very first music lessons from his father Michele, before his untimely death in 1864. In 1868 Puccini enrolled in the violin class at the “G. Pacini” Institute of Music, a school renown even outside Lucca, where he continued his studies, later passing to the composition class, where his teacher was Carlo Angeloni. His first compositions came to life in Lucca, including the Mass for 4 voices, his graduation piece written in 1880.

The years of training in Milan and his first works.

From 1880 to 1883 Puccini attended the Milan Conservatory, under his teachers Antonio Bazzini and Amilcare Ponchielli. Determined to be only a composer and not a teacher or interpreter of music, he composed his first opera, immediately after the final exam at the conservatory. With Le Villi he took part – unsuccessfully – in the Sonzogno Competition for one-act operas. Some friends still managed to organize a first performance of the work in 1884, and this was how Giulio Ricordi, the most important Italian music publisher, first noticed Puccini. He not only inserted Le Villi in the catalogue of his publishing house, but commissioned a second opera from Puccini, Edgar. The composition was very long and laborious, but the premiere, in 1889, was sadly unsuccessful.

His love for Elvira and the first successes

Meanwhile Puccini had fallen in love with a married woman, Elvira Bonturi, who abandoned her husband for him in 1886. Only in 1904, after the death of Elvira’s first husband, were the two able to legalize their living together and legitimize their son Antonio, who had already attained the age of 17. In the early years of their relationship the small family lived in difficult financial conditions in several rented houses, sometimes even guests of relatives, separated from each other. It was only thanks to the increasing success of his third opera, Manon Lescaut (1893), that Puccini was able to create a solid economic base for himself and his family. In 1896, with La bohème, he achieved even greater success, which soon reached an international level. He reaped good earnings, purchased two buildings in Torre del Lago and Chiatri, a few kilometres from Lucca, and transformed them into two country villas, retaining ownership until his death. For a few years he also kept a holiday home in Boscolungo Abetone. In Milan he also had quite a large flat, which he rented.

Success did not desert him even for the two later works, Tosca (1900) and Madama Butterfly (1904), thanks to which Puccini became the richest and most famous composer living. Major opera houses abroad staged almost complete cycles of his works in his presence (in 1905 in Buenos Aires and London, in 1906 in Budapest and London, in 1907 in New York and in 1908 in Paris). In 1910 a world premiere of an opera by Puccini took place for the first time abroad: La fanciulla del West made its debut in New York, and was a great event. In 1913 Puccini received a well-paid appointment to write an operetta from a publishing house in Vienna: the result was his next opera, La rondine (1917), which suffered significant difficulties and delays due to the international crisis, shortly to lead to the outbreak of the First World War. Puccini greatly detested war and spent these years mostly in retreat in Torre del Lago. The premiere of his three single-act plays, The triptych, set to music at the time, took place shortly after the end of the war in New York, but without the presence of the composer. Puccini only returned to London in 1919, and again in 1920 for the British premiere of The triptych and Vienna for the first performances in German of La rondine and The triptych. In both cities, most of his operas were on the bill at the same time, a situation which was repeated in 1921 in Monte Carlo, a confirmation of continuity, or rather an increase in the fame and international success of Puccini. Despite this his works from La fanciulla del West onwards were staged more rarely, even in Italy; evidently the most complex and progressive musical language that characterized them was less appreciated by the public, which tended to prefer the ‘popularity’ of the earlier works, from Manon Lescaut to Madama Butterfly.

His great passion for cars and houses

In all events the proceeds he drew from copyright were sufficient to cultivate, even after the war, two of his predominant passions: cars (the first he had already bought in 1902, to be followed by another dozen) and, in particular, houses. In 1919 he bought the Torre della Tagliata, a house of Etruscan origin in the Maremma, near to the sea. He soon got rid of that solitary building and began to build a new villa in Viareggio as his main residence, replacing the one in Torre del Lago, moving there in late 1921. In this house he concentrated mainly on his latest opera, Turandot, which he had started to work on in 1920. This task proved to be very problematic and Puccini often considered abandoning the enterprise.

His later years, and illness

This opera had not been completed when a cancer of the larynx was diagnosed in Puccini, who for years had complained of an insistent sore throat. In order to undergo the innovative, experimental treatment of radiotherapy, Puccini went to a specialised clinic in Brussels. He survived the operation only a few days, and died on 29 November 1924. The unfinished Turandot was staged for the first time in 1926 and since then is one of the most frequently performed operas of Puccini.