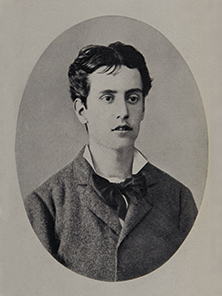 The Puccini family, which had settled in Lucca in the first half of the 18th century, moved to corte San Lorenzo in 1815, after the sudden and untimely death of Domenico Puccini, Giacomo’s grandfather. Probably Domenico’s young widow, Angela Cerù, wanted it that way, to be closer to her brother Arcangelo who lived on the first floor of the same building. The Cerù family played an important role in Giacomo’s forming years; in fact, Nicolao, son of Arcangelo, was to be generous with moral and material aid. When the family moved it was composed of old Antonio, the great-grandfather of Giacomo, his wife Caterina Tesei, their daughter Angela, and also Angela Cerù, and her sons Giacomo (soon to die), Chiara and Michele, Giacomo’s father, and a servant.

The house of a family of musicians

This is the house where Giacomo Puccini was born on 22 December, 1858, and where he was also christened by special permit, the next day, perhaps because in danger of death. He was given the names of all his preceding musicians: Giacomo Antonio Domenico Michele (and Secondo Maria), to summarize the whole family tradition.

At the time of his birth his parents lived in the house, Michele and Albina Magi, with his grandmother Angela Cerù, his sisters Otilia, Tomaide (the third born, Temi, had lived less than a year), Maria Nitteti, Iginia, and a “servant” a certain Assunta Menconi. A year later his other sister Ramelde was to be born, and another “servant” taken, Carola Martinelli, and later on Macrina was born and finally, after the death of his father, Michele junior.

It is in this house that Giacomo lived his happy childhood years, until the death of his father Michele, on 23 January, 1864, and those of adolescence and early adulthood, during which his mother Albina followed the training of all her children with admirable determination, although having to face a very difficult economic situation. Even though Giacomo moved to Milan in the Autumn of 1880, to continue his studies at the Conservatory, this was still his home. After the death of his mother Albina, 17 July 1884, the house was rented. At that time Giacomo and Michele junior resided mainly in Milan, and the sisters were all married (except Iginia, who had become a nun). The property passed to Giacomo and Michele junior, since the sisters had declined their inheritance in favour of their brothers.

The sale and redemption

In September 1889 Giacomo and Michele junior sold the house to their brother-in-law Raffaello Franceschini, but they included a special clause in the contract, which guaranteed Giacomo and Michele the opportunity to repurchase it. More than once in his letters to his brother Michele, in the meantime emigrated to South America, Giacomo recalled: “think of the redemption of our poor house in Lucca”. However, it is only after the great success of Puccini’s Manon Lescaut in 1893 that he could actually make use of the special clause, despite the resistance of Raffaello, which was evident from some of the composer’s letters: “I sincerely regret that the ownership of the house where I was born was transferred to others […] I shall recover my house as soon as possible. I am sorry not to write according to your desires, but my affection for the house of my birth makes me be impolite with you”, and again,” I hold to the 4 cracked walls, the broken beams, even the rubble of my house and I beg you not to insist any further because this would displease me. I will redeem my home, of this you can be sure […] I love the place where my relatives were born and for all the gold in the world I would not give up my paternal roof.”

A strong bond of the heart

The house nevertheless continued to be rented and Puccini, often distant, counted on the collaboration of Franceschini, his sister Ramelde or his friend Alfredo Caselli, to follow the various leases and normal maintenance work, including condominium work. Here is what he wrote a few years later to Ramelde: “As far as the house is concerned, you take care of it. But as Raffaello could come to me for a week, coming from Lucca and returning he could take a look at the house and see to the builder etc. The jobs are not many, and concerning the beam in the kitchen, I think it will last for centuries. I have seen it. The house needs cleaning up and the kitchen floor and passage floor have urgent need of repairs. The problem is the stairs and the loggia. Raffaello should try to agree with the neighbours and have the scaligero plaster scraped off before whitewashing again; and all those tools in the loggia should be removed (whose are they and who put them there? Perhaps the cooper?). It’s a disgrace, and if they won’t remove them we should have the competent authorities do it. Then there are the windows: (some) need new putty on the panes”.

The house after the death of the Maestro

On the death of Puccini, the property passed to his son Antonio (with usufruct for Elvira), then, on the death of Antonio (1946), to his wife, Rita Dell’Anna.

In 1974, culminating a series of initiatives by the City of Lucca – mainly the establishment of the Fondazione Giacomo Puccini in 1973 – Rita Dell’Anna donated the Birth Home for it to be transformed into a museum. The Museum, fitted out by the Fondazione Giacomo Puccini with furniture, paintings, documents and memorabilia donated through separate acts by Rita Dell’Anna and later by her brother Livio, was inaugurated on 28 October, 1979.
Since then the Museum remained open, closing for short periods, until Autumn 2004, when the Fondazione Giacomo Puccini started a project of total restoration which included fitting out the museum anew, the qualifying objectives being to reinstate the original layout of the rooms and recover the decorations of the walls.

With the judgment which granted the ownership of the property and the collection contained therein to Simonetta Puccini, work was interrupted (early 2006).

At the end of 2010 the Fondazione Cassa di Risparmio di Lucca bought the property and the collection. At the same time it resolved to entrust the Museum to the Fondazione Giacomo Puccini and to finance the completion of the work and fitting out which had been interrupted, according to the previously defined project.

On 13 September 2011 The Birth Home Museum reopened to the public.