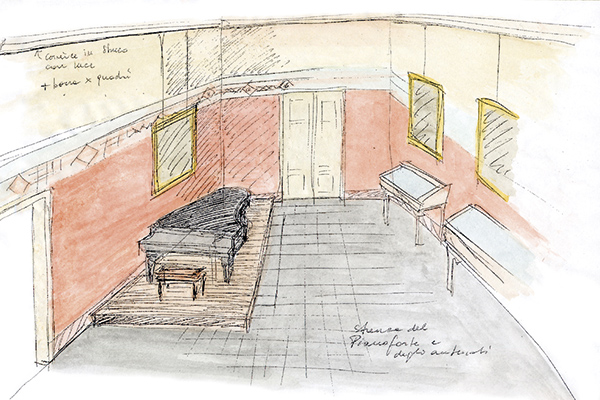 When in 2003 I was asked by the Fondazione Giacomo Puccini, which at that time already managed the Birth Home of the Maestro, to rethink staging and draw up a restoration project, I accepted the assignment with enthusiasm and, together with Gabriella Biagi Ravenni, director of the Foundation, we began to review the entire layout of the house through the documents obtained up to that point, attempting to reconstruct the environment in which Giacomo Puccini had lived.

The first phase of restoring the original interiors

The house appeared totally whitewashed, with no suspended ceilings and a guided tour that made the layout of the environments and their various purposes quite incomprehensible.

The furnishings, including those from the Dell’Anna donation, which came from houses which had belonged to the Maestro, had been supplemented with items which were totally out of place, providing a misleading picture of the house.

From the limited descriptions that were found in Giacomo’s letters, understanding the tone of the house was impossible, even if the old plans suggested an elegant apartment.

We decided to perform a series of tests on the walls, which in our opinion conserved decoration work. It was stunning to see that from under the whitewash appeared, room after room, decorations assignable to various ages, but all attributable to the period when the Maestro lived. So it was that we had confirmation of various hypotheses on the purpose of the rooms in the house. We also found an absolute correspondence with the words written in the Maestro’s letters.

The apartment entrance has returned to the hall, as it was in Giacomo’s time, and this ambiance, richly painted at the beginning of the 19th century, at once gives us the decorative key to the house which had, as can be seen today, a very elegant tone.

As the whitewash was being removed, some cracks appeared which led us to make a static examination of the walls and ceilings. Unfortunately a very serious situation has emerged involving not only Puccini’s Birth Home, but the entire building. A consolidation project has been drawn up by the practice of ing. Stefano Caramelli which has stopped restoration work on decorating and refurbishing to give priority to the removal of flooring, the consolidation of the beams and the implementation of chains capable of restoring stability to the perimeter walls that risked collapse.

The interruption of redevelopment work

At the end of the work mentioned above, and during the recovery phase of the removed floors, work had to be stopped because of a court sentence which established the transfer of ownership from the Fondazione Giacomo Puccini to the Maestro’s niece, Simonetta Puccini.

The latter after a few years transferred the property to the Fondazione Cassa di Risparmio di Lucca, which had already contributed to fund the work conducted so far in his Birth Home, and has re-appointed the writer to complete the construction work.

Work has resumed, the flooring has been completed, the bathrooms have been refurbished and the decoration has been restored.

The help of the architect Leonardo Casini was crucial in completing this phase, appointed by the Fondazione Cassa di Risparmio di Lucca to complete the work according to the plan originally drawn up by the writer and Gabriella Biagi Ravenni.

The decision to re-open two filled-in doors and rebuild a wall demolished in the mid-20th century has completed the faithful reconstruction of the Maestro’s house, which we have decorated with furniture, properly restored, once belonging to the Puccini family, supplementing reconstruction of the rooms with new elements such as the glass partitions which transform two environments into real exhibition space, restoring some glass display units previously used in the old layout and adding completely new elements for the two rooms exhibiting documents. The house is completed with a modest environment on the mezzanine, serving the kitchen, where the attic of La bohème has been reassembled, thanks to the collaboration of the Teatro del Giglio in Lucca.

In re-arranging the house we have distributed the furniture belonging to the family in the rooms following their historic use: dining room, bedroom, kitchen, etc.. and re-ordered the curtains, selecting, room by room, colours and the decorations present and in fashion at the time, thus completing the rebuilding of this house, which is now able, in addition to showing the collection of valuable manuscripts, to provide rare testimony of Puccini, as well as exhibiting excellent portraits of the Puccini family, to help us understand where the Maestro lived in his early years.