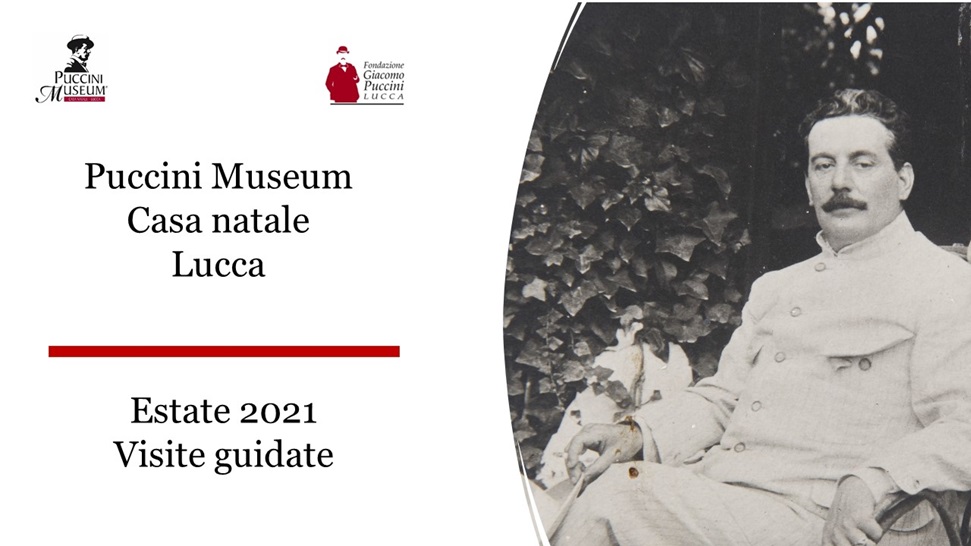 June 25 Puccini and the art of dressing – Giacomo Puccini has always been considered an icon of men’s fashion, an arbiter elegantiarum, an example of style and class, so much so that he has become a “testimonial” of clothing and accessories.

July 23 Turandot: the Princess imagined by the Maestro – Was what the spectators of the first of Turandot at the Teatro alla Scala saw and heard on April 25, 1926 really what Giacomo Puccini had wanted? Was the one who appeared on the scene the Princess imagined by the Master?
The visit is part of the collaboration with the Textile Museum of Prato for the exhibition Turandot and the fantastic east by Puccini, Chini and Caramba

12 August The instrument I love most after the piano is the shotgun – Giacomo Puccini’s passion for hunting is universally known. Through his letters and stories from those who knew him, we will tell about snaps, birds with unlikely names and signed culinary recipes.

28 August Giacomo Puccini: from bicycles to airplanes – Everyone knows Giacomo Puccini’s passion for cars, for engines in general, but few know that he was also a passionate cyclist. On the occasion of the Ciclopedalata dedicated to the Maestro through the Puccini places in the province of Lucca, from the capital city to Versilia, to the Serchio Valley.

Giacomo Puccini and the sickness of the calcinaccio

The story of the birthplace, of the years in which Giacomo Puccini lived there with his family and of the deep bond that the composer had with this house and with the other houses in which he lived.
On the occasion of the 10th anniversary of the reopening of the Museum after the conservative restorations and the 100th anniversary of the Villa Puccini in Viareggio.

The Master and the Divo Caruso

The names of Giacomo Puccini and Enrico Caruso on the same billboard were synonymous with guaranteed success, with sold out theaters and astounding takings, with superlative reviews. A fame still alive today. But what relationship was there between the famous Maestro Puccini, an established composer, and Divo Caruso, the most famous tenor in the world?

On the occasion of the celebrations for the centenary of the death of Enrico Caruso 1921-2021.